A few weeks ago, the REALtimeFOOD team assembled a group of creatives from seven different countries, inviting them to Megijima for a workshop aimed at generating ideas for socially and ecologically beneficial economic activity for this small island.

The workshops on this weekend were led by artists Patrick Lydon (USA) and Suhee Kang (Korea), who gently guided the groups to come up with actions that spur socially and ecologically beneficial economic activity, while adhering to three principals:

One of the concepts that came out of the workshop was a brand identity for existing local food products, produced by team members Dorothy Cheung (Hong Kong), Pattarapol Leemeechoke (Thailand), and David Billa (France). Far more than just a logo design or hip packaging, the brand identity they came up with beautifully encompassed the above three principals.

Celebrating the island’s unique treasures, the group researched the most popular agricultural and food products from the island and created identities which tied in with a piece of local folklore. In this case, the folk figure they chose was the “oni” figure —  known as “ogre” in English, the oni is part of a famous legend in Japan where Momotaro “the Peach Boy” travels to this island to defeat the ogres who reside in a cave on the mountain top. On a side note, there is, in fact a cave here and the legend is so intertwined with the the place here that the other common name for the island is “Onigashima” or “The Ogre’s Island”. 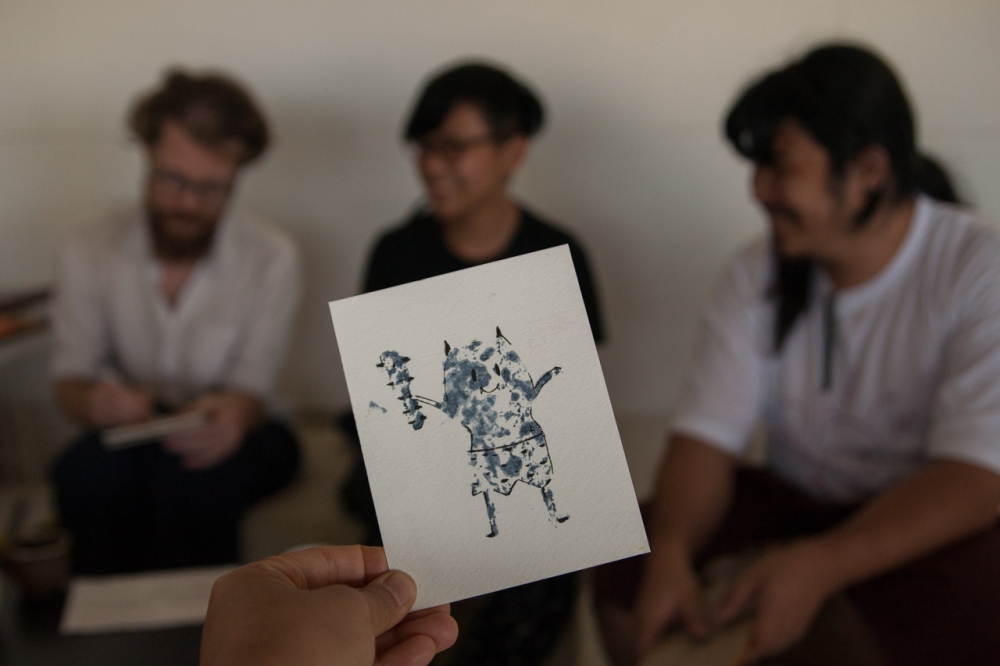 In pursuit of local and sustainable resources, the prototype labels were produced on hand made paper — made on site using waste paper from the island.

For ink, the team experimented with extracting pigment from local plants, as well as using black ink made from octopus ink — a byproduct from the fishing industry which it typically disposed of by the local fishermen.

Finally to allow for local hand skills to be used, the team sought to hand carve stamps that could easily be inked and used by locals.

After the workshop was finished however, we didn’t want to let it sit in the conceptual world.

We took the idea further, asking our resident artist, Pattarapol Leemeechoke, to refine the concept into a usable product. Here are some of the concepts, and works in progress, that he came up with during his time as a resident here. 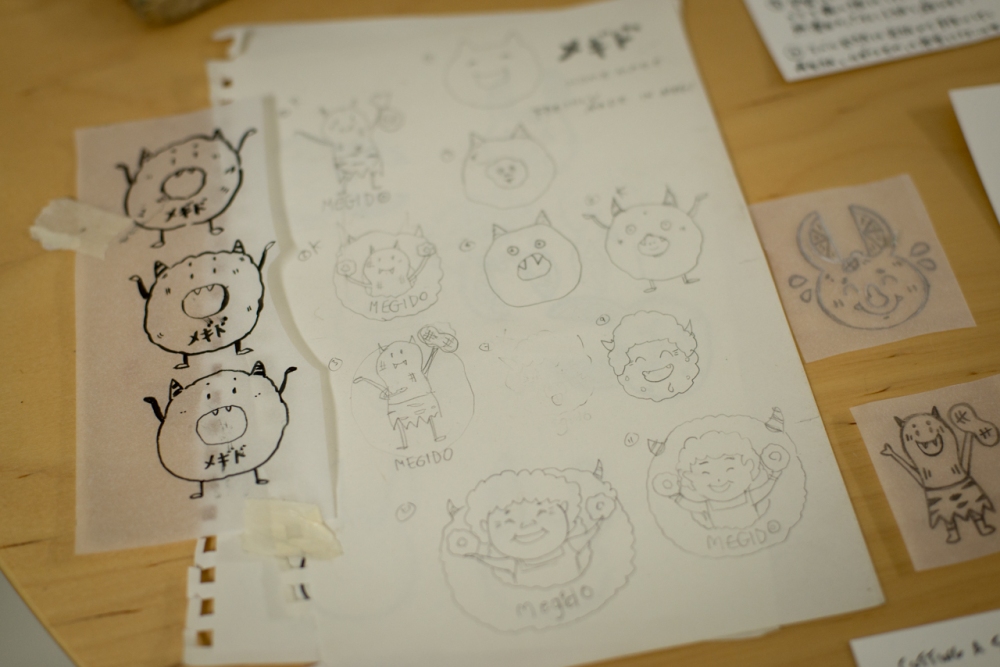 We’re happy to announce that Kurokawa’s handmade donuts are now for sale in Oni Cafe Gallery, complete with these unique — and honestly pretty cute — hand-stamped “Ogre Donut” characters, made with a hand-carved stamp on, yes, hand-made paper … all of it created right here on the tiny island of Megijma.

It might seem like a small thing to aim one’s creative efforts at, but indeed, it is a huge thing for a small town with limited facilities, limited waste disposal capabilities, and a small amount of human and natural resources from which to make their living.

Such a project not only helps the economic sufficiency of a donut-making woman, it works with a mindset that creates ripples felt by the environment, by consumers, and by the community — ripples that spread far beyond the one product it helps to promote.

We also hope it inspires other individuals and communities to explore such small-yet-beautiful solutions of their own.

REALtimeFOOD is a project of SocieCity and Final Straw: Food, Earth, Happiness, and is conceived and run collectively by artists Patrick Lydon and Suhee Kang, and producer Kaori Tsuji.